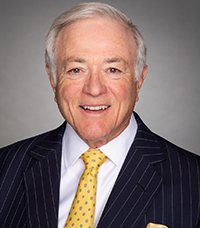 William Rutherford grew up in McMinnville; attended the University of Oregon; graduated from Harvard Law school; served on active duty in the military; lived in Europe for two years; returned to Portland to run a  law practice; held a seat on the Pacific Coast Stock exchange; returned to McMinnville after his father’s premature death to run the family retail business (13 retail stores in McMinnville and the upper Willamette Valley); was elected four times as the community’s representative to the Oregon legislature; and in 1984, was elected Treasurer of Oregon. He was later elected Chairman of the Oregon Investment Council, managing the state’s $14 billion PERS retirement fund.

He has served as President, CEO and Board member of two investment companies with offices in New York City, London, Paris, Tokyo, and Frankfurt.  He has been a board member of a number of international and domestic companies.  William aided with the restructuring of Metallgesellschaft, an international trading, oil and gas company, and Europe’s 10th largest company.

William Rutherford has been quoted and published in:

He has appeared on CNBC, Bloomberg Television, and served as speaker at numerous investor conferences.  William is the author of Who Shot Goldilocks? How Alan Greenspan Did In Our Jobs, Savings, and Retirement Plans.

On Wall Street Rutherford ran 2 different International investment firms then decided to move back to Oregon in 1993. And for most of the last two decades, Rutherford has been managing assets for private accounts, pension funds, and endowments.

…“One of the real advantages in my life,” says Rutherford, “is that I operated stores on Main Street and then went to Wall Street and saw how the global economy worked. Our firm had money in 22 international markets. I was chairman of a NASDAQ-traded company, and I also had a principal role in the turnaround of Europe’s 10th largest company.”

“My broad experience has given me a tremendous amount of information—a tapestry to make my investment management better. I see and understand trends better than most, and that enables me to make good stock selections, which is why our portfolio returns are as strong as they have been.”

Lawrence Strauss of Barron’s writes about this booming industry in their February 20, 2006 cover story: “Separately managed accounts are one of Wall Street’s hottest products. Reason: They can be adapted to an individual’s needs and cut taxes, too. In the financial world, think of the typical mutual fund as your friendly, neighborhood diner and the separately managed account— one of America’s fastest-growing but least understood investments—as Chez Panisse.”